Another severe case of poisoning in Serbia 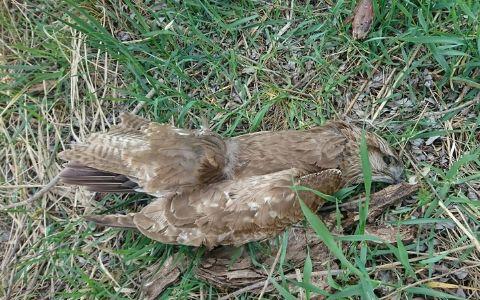 On Sunday, April 12th 2020, Bird Protection and Study Society of Serbia reported to the Provincial Environmental Inspection that wild birds have been poisoned in the vicinity of Bačka Topola, Serbia.

That same day there were found two dead strictly protected species of birds, one Common Buzzard and one Marsh Harrier, and near the carcasses of the birds several pieces of meat stained with red suptance were observed trown at the ground. This case was found by a ranger in the protected area of the "Bačkotopolske doline" Nature Park.

One of the six unfortunate Marsh Harriers  (photo: BPSSS archive)

On Monday April 13th 2020 officials of the mentioned inspection, with the assistance of the officers from the Institute for Nature Conservation Province of Vojvodina, local police, protected area manager and the members of Ecological Society "Arkus" carried out extraordinary field search and inspected the a large area within and around "Bačkotopolske doline" Nature Park. Detailed search of the terrain has revealed an unprecedented case of deliberate wildlife poisoning.

A total of 50 poisoned baits were found at 17 sites and 18 dead animals were collected. Six specimens of Marh Harriers and two strictly protected Common Buzzards were killed, as well as four Ravens, two Hoded Crows, two Magpies, one Rook and one fox, which are protected species. From the first information, it is clear that this is a deliberate and organized poisoning of wild animals, probably aimed at wild predators such as foxes and jackals.

It is feared that an unknown number of poisoned baits remain in the field, as they are difficult to find in the growing vegetation, which can cause new damage to protected and endagered wild species.

"There were only two pairs of ravens nesting in the vicinty of Bačka Topola. This poisoning killed 4 individuals, so we are justified in fear that both pairs were missing. This is irreparable damage to our nature," said Akoš Harkai, President of the Ecological Society "Arkus".

In the recent years, such cases were investigated with the assistance of a Hungarian Dog Unit, with their team of professional tracker dogs. However, this is now not possible due to the closure of the boundaries caused by the SARS-CoV-2 virus pandemic.

The appearance of the poisoned baits and the body of the dead animals indicate that the banned carbofuran has been used again. Data from the BPSSS show that in the last 20 years, 320 cases of wild bird poisoning have been reported throughout Serbia, and in only a few cases perpetrators have been found and punished.

Consrvation damage in this case is equal to 1 455 000 Serbian Dinar (more than 12 000 EUR). This case is currently under active investigation.